Adventure and comfort go hand in hand when you visit some of the paradisiacal destinations of the Canary archipelago such as Garcey Beach in Fuerteventura, located on the West coast of this beautiful island.

Garcey in Fuerteventura is known as one of the few natural environments that still remains unspoiled within the Canary Islands. It has more than 500 meters of black sand mixed with gold sand, stones and strong waves. In addition, it houses the remains of a shipwreck well known to locals. Are you ready to discover more about this destination?

Garcey Beach in Fuerteventura and the sunken ship: The American Star boat

Garcey Beach has a unique historical remain stranded on its shores, the boat American Star, The ship that sank more than 20 years ago and a huge part of it remains almost intact.

In its time, the American Star was one of the most luxurious vessels in the world. It costed a huge amount of money and was inaugurated in 1939 by the first lady of the United States, Eleanor Roosevelt.

On January 15, 1994, the American Star that was sailing with a tugboat suffered a serious mishap due to a storm that hit the Canary Islands. There were waves of more than 8 meters high, strong winds and rain. Strong winds separated both boats, preventing their advance.

Its crew was rescued that same night and the American Star was left adrift until it ran aground off the coast of Fuerteventura, in the waters of Garcey.

Many locals and tourists are surprised to see the old and rusty “monument” that looms on the shores of this unspoiled beach. The most surprising thing is that after so many years, some of the ship’s wreckage remains almost intact.

How to get to Garcey Beach in Fuerteventura?

Together with Cofete Beach, Garcey in Fuerteventura is one of those destinations not very frequented by tourists, so if you are looking for a quieter place to visit during your vacations, you can get to this beach.

To get to Garcey Beach in Fuerteventura you must take the FV-605 road that connects La Pared and Costa Calma. After traveling a few kilometers you will come across a detour to Ajuy, which you should skip unless you want to make a short stop to get to the unusual  Caves of Ajuy.

If you keep going, about 4 kilometers to the south, you will reach the municipality of La Pájara where you will see a sign indicating the route from La Solapa – Garcey. Take the next detour to the right, through a completely dirt road, and after about 5 kilometers you will find the car parks to park your vehicle and visit the Garcey Beach in Fuerteventura.

If you don’t have a car, no problem! You can get to Garcey by taking bus lines 01, 04 and 05. You will have to get off at Calle Garcey to enjoy a day in this charming place.

Surf in Garcey in Fuerteventura

For the most part, the beaches on the west coast of Fuerteventura have strong swells that are ideal for surfing but you should be careful when bathing. For this reason, on the Garcey Beach in Fuerteventura several championships of this sport are held every year.

Some of the best known events in the area are Garcey’s BodyBoard and the Surf Championship. In both, more than 200 high-level athletes congregate, that’s why they occupy a prominent place in the calendar of all the surfers of the Canary Islands.

If you are a fan of this water sport or you practice it, don’t miss the opportunity to surf a few waves on this incredible beach. The Garcey currents in Fuerteventura do not disappoint and can become a real challenge for any surf lover.

Visit the municipality of La Pájara

Apart from Gracey, we encourage you to visit other incredible beaches in Fuerteventura that are also in Pájara, one of the largest municipalities on the island.

In this coastal region there are very popular localities within the island such as Morro Jable and the Jandía Natural Park, which is home to the native and protected fauna and flora of Fuerteventura.

Within this municipality there are other well-known tourist environments such as Costa Calma and Solana Matorral, where you can practice endless water sports or simply enjoy its turquoise waters and white sand.

In addition, we also suggest you to enjoy the Majorera gastronomy (as the inhabitants of the Canaries call the island) such as delicious fresh fish with mojo accompanied by delicious wrinkled potatoes and finish the meal by tasting the typical gofio, a very representative dish of the Canarian culinary culture.

Where can you stay in Fuerteventura?

Garcey Beach in Fuerteventura is one of the many unique places that you can visit when you go to the charming Canary Island that enjoys one of the best climates in Spain.

At the Lopesan Group we have excellent all-included hotels on the island. For more information about our establishments and packages visit our website and learn in detail the different services we have for you. Ready to live a dream vacation?

Enjoy the best of Fuerteventura!

The 8 best coves in Fuerteventura 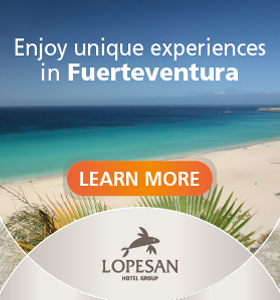