Which are the best Canarian desserts?

The Canary Islands are a volcanic archipelago known for its beautiful beaches of black and golden sand. It is a gastronomic paradise which exquisite dishes will make you dream, among which we can highlight the wrinkled potatoes and the delicious mojo sauce. However, if you are a big fan of sweets, you have to know that the Canarian desserts are also part of the culinary delights that the island offers. Discover the best desserts you should try during your stay on the island!

The Canary Islands have no rival as hostesses, as they receive tourists with an excellent treatment and spectacular cuisine, in which we can highlight their confectionery. The following list shows which have been classified as the best Canarian desserts:

In the Canary Islands, creativity excels in the best restaurants and also in the most traditional and familiar cuisine. That is the reason why people use ingredients as varied as sweet potatoes to create a dessert. This is mixed with the puff pastry of the trucha (or pasty), which gives it an exquisite flavor. It is one of the most typical Canarian desserts during the Christmas season, although it is prepared all year round.

It is one of the most typical Canarian desserts. It is made with sugar, egg and lemon. They are very similar to those found in the peninsula. However, these do not contain almonds, but a subtle touch of lemon.

The frangollo is considered a delight among the Canarian desserts. It is served mainly on special dates, such as Christmas or the day of the Canary Islands, although it is less common compared to marzipan and biscuits. It is made from crushed legumes, cereals and millet (corn).

Your hotel is here

The chocolate biscuits are not the only ones that reign in the Canary Islands — you will find the Moya sponge cake too. The Moya cake is a crispy and dry sweet that is prepared by baking it twice with egg, sugar and lemon, covering it after icing sugar.

It was originated by mistake, since the baking time of some sponge cake was exceeded and these were burned slightly. To cover up the error, the white egg and sugar cover were added, and that’s how these sponge cakes were born.

The traditional time for this dessert is surprisingly during the summer, when many festivals are celebrated. They begin to be elaborated in the month of May and it is one of the easiest Canarian desserts to prepare. They are sold in the streets in small stalls. Moreover, they are easy to locate since each stall that sells them carries an umbrella as a distinctive, leaving the nougat in full view in wooden boxes.

Every tourist is fascinated by Prince Albert, which is one of the island’s favorite Canarian desserts. It is a chocolate mousse whose interior is full of almonds and hazelnuts. It is sometimes combined with cream. The preparation of this sweet is very simple and its name is due to the fact that Prince Albert visited the island when the chocolate was being made. In addition, consumers stated that the dessert was as pleasant as the prince.

>>  The Canary Islands, one of the safest destinations in Europe

The appearance of the Canarian marzipan is very particular, since it has no resemblance to the marzipan we all know, as it is larger than the marzipan. Apparently it is the same as a round cake with almonds covering the top of this sweet.

Its taste is exquisite due to the combination of almonds, lemon and cinnamon. It was created by Dulcería Nublo in Tejeda. However, this bakery distributes this marzipan by manifold Canarian dessert shops.

Curd cakes are often confused with Herreñan quesadillas. However, the preparation of this dessert is different, although its taste is just as delicious. The main ingredient for these cakes is the curd or the tender white cheese with palm honey, but it does not contain lemon or cinnamon powder like quesadillas.

Also called “leche machanga”, it is prepared with milk, lemon, vanilla powder, cinnamon and sugar, and it is decorated with chocolate to grate. All the inhabitants of the Canary Islands know this dessert, as it is a kind of custard that drives anyone who tries it crazy. Originally, it was a luxury candy in the Canarian kitchens and was taken only during the holidays, so today it is still prepared only on special dates and at Christmas.

As for the origin of this Canarian dessert, it is said to be many years old. It is a recipe that was found on the island in the fifteenth century when the Spaniards conquered the islands. It is made with almonds that are obtained in the Ariadne Valley and other places in the Canary Islands, which are the perfect complement to several desserts, such as ice cream or custards. In addition, it has a touch of lemon and palm honey.

>>  Holidays in the Canary Islands with children

The Canarian quesillo is a typical dessert of the islands and its preparation is very simple, quite similar to the flan. It takes many ingredients to sweeten the palate of visitors. Its ingredients are: condensed milk, a touch of cinnamon, eggs, lemon zest and liquid caramel. Its appearance is almost the same as that of flan, and it is one of the Canarian desserts that you should try if you visit the island.

A few years ago, moles eggs were not very well known. However, they have spread all over the islands because of their delicious taste. Their texture is the same as that of chocolate mousse, but they are made with egg yolk, cinnamon, water and a mixture of sugar. Its fame has grown so much that it has become a popular dessert in places like Latin America.

The adventure is here

It is an exquisite dessert that is characterized for being accompanied with cookies, sighs of Moya and cream. Its name comes from the Uruguayan families that were dedicated to the restoration of the islands. They made a mixture of Canarian desserts with recipes from Uruguay, and today it is a typical sweet from the area.

Why should you try these Canarian desserts?

If you visit these islands, you should not miss the opportunity to try these delicious desserts from the Canary Islands. Most of these sweets are served only locally. In addition, many of them have been called the best desserts in the world.

Enjoy to the maximum the Canarian desserts in the exceptional restaurants of Gran Canaria and Fuerteventura. In addition, in Lopesan we offer you to enjoy the best vacations, because our hotels have the perfect combination: dream lodging, varied gastronomy and first class attention. We are much more than just hotels — we are manufacturers of happy memories. Contact us!

Majorero cheese, the delicacy of Fuerteventura

Flor Cheese: one of the wonders of the Canary Islands

The typical Fuerteventura food that you must try 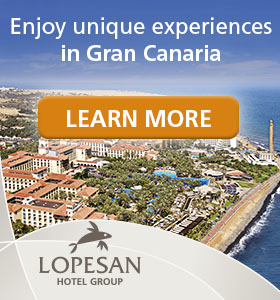